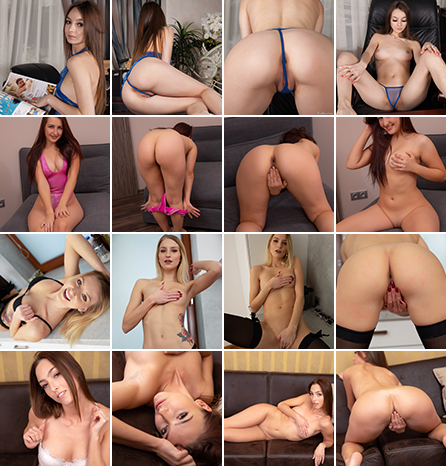 I love them all!

Love them all, but Audrey is special :O

Guest bundles are for models we shoot as tests and to get your opinion. They may not get regular updates like favorites, but we still enjoy shooting them and are good for those who like seeing new models.

If you like a specific model, you can let us know!

Vika is easily my favorite of this group… incredibly cute, nice body, and verrrry giving… Nice second showing from Diana… Selene was my least favorite of the last group, but she’s a solid third place finisher this time… Not that she’s unattractive, but she doesn’t stand out much among the others (IMHO)… do LOVE the extreme tease of the buns up cupped vagina shots though… and then there’s Audrey… they all have potential, but Vika is easily the MVP, and more Diana is much appreciated.

Thanks for the feedback! Appreciate knowing your favorites. The models are well aware of how to do good posing, and some will be taking the tease even further.

There’s just something about Diana. I find her to be hotter than the sun

Katerina A from TokyoDoll would be a great addition in this website just like what you did for Rufina T. I’m pretty sure there will be a lot of support for her if you decided to shoot her.

Just as much with the first guest bundle, I wouldn’t mind seeing all model from this bundle more often, but let me be a bit more specific.

While I thought it was difficult to choose just 1 model in the first bundle, it’s even harder this time, therefor I will choose 2, Diana and Vika.

Vika just wins it with picture 98 alone, which will make a nice desktop wallpaper 🙂 She is gorgeous, love her (by lack of a better word) “serious” expressions and the set in general is just high quality.

Diana had a wonderful debut update which made me hope for more and with her appearance that has only increased. As mentioned in the comments on her Newcomer update, she indeed has a look I enjoy, very much so.

Selene looks just as great as she did in the first bundle, and while I am glad she isn’t wearing heels here, the rest feels just like her it did in the fist bundle (certainly not bad, but not great either) my comment from then stands, a bit more thought in the overall setting would make a lot off difference, at least that’s how I see it.

Audrey has a beautiful face and a body to match, I think she has a lot of potential, and with set name of First Meeting I do hope that implies that will be more, Second Meeting, Third Meeting, and so on 🙂

If you do plan on releasing more guest bundles over time, perhaps you could include a vote option for the people who bought it, that way I’m quite sure you’ll know our favorites.

Vika is a favorite from her former work. And Selene really looks cute!

Vika is great, been hoping she would make her way here

Selene, Selene, Selene. You gotta get her and Naomi together!!! …maybe a sudsy shower scene with those two lathering each other up!

Any chance we’ll ever see more Vika? Ever since this came out, I’ve been anxiously waiting for more of her!

Loved Vika the most from this group… still hoping she’ll reappear one day.