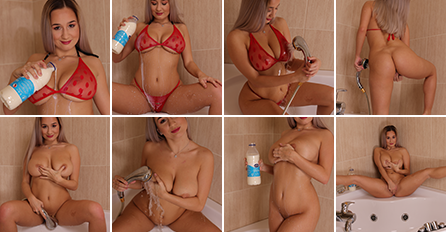 Wow! This is one sexy lady with an amazing body.

oooookkay… this confirms it. She needs to be model of the year. her own site, whatever it takes!! OXOXOXOXOX

man oh man, she has it all

WOW!! This set even better than I ever imagined. Her body is to die for. Wooooooooooooooolfff!!!

I was gonna say, please don’t have Charlotta with anyone! Then I was seeing who on TM she would go good with and first one I thought…Kayley. I was saying I know the name Phoebe, but why isn’t she coming up on here?! MC!

I wasn’t gonna bring it up, but with duo model sets, maybe it was just this set, but the latest Anisa team up was such a huge disappointment. A 3 min vid when her vids are usually much longer and then for her part they just cut to the chase. No tease, no set up. It was a really bad showing. I’m hoping this was a new videographer and hopefully last time they film. Also it was horribly cut up, jumping from forward to back in the video. Seemed like a really rushed, cut up job. I never said I was disappointed in a vid, but that one I can honestly say I was. What makes matters worse, Anisa is one of my top 3 faves and she rarely has a vid or even a set out these days, and that’s what we got. Let me be clear, through no fault of her own. I loved her, the person who filmed that was horrendous and I’m assuming they cut it as well.

I say keep Charlotta alone. She doesn’t need a team up and I don’t think it would actually help her or the other model. I feel like she’d overshadow any model she’s in a set with. I know people are crazy about Phoebe on MC, saw her first few sets and I don’t really get the hype. Maybe she’s gotten better over time, but the first few definitely didn’t catch my attention.

Now, maybe Charlotta and Anisa would be something! If it was one of many releases in a row, not one every few months like Anisa got or had.

Charlotta is sexy AF. She checks all the boxes. Love her.

TM, this is the last update for her this month, right?

yeah, its sad to think we won’t get a Charlotta set on Monday. and just when there was a reason to love Mondays too

yeah, it sucks this month ended so fast 🙁

You have plenty of material while you wait. 😉

However, nothing beats the full sets 😀

TM, are you sure there isn’t another Charlotta Monday?? I wouldn’t be mad at you if there was.

Thankfully I didn’t watch this set yet. I may have to hold off on it then and wait until the time is right.

TM, why you leave the poor boy hanging. Don’t you see he has the blue balls 😆 . New month new model.

@John release it, she’s waiting for you 😆