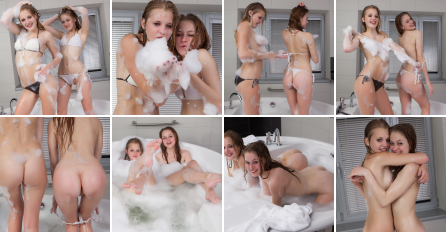 Yeesh! How are there no comments for this vid, first of all!?!
This one was a struggle to get through and I still didn’t make it. I love Madison, but actually came across this going through Angela’s videos, and I’m glad I did! These two definitely have good chemistry and Madison in that top with her breasts glistening was a sight to behold! Madison having a good time, being playful with Angela and the camera brought a smile to my face.

(I wish we could hear the music they hear or even hear the real audio. Or even put the same music over the vid like you did with the music you chose, if they don’t want to use their voices. That music does not match.)

@1:56 though, jeez, the camera person messed up!! It looks as if Madison was playfully putting her feet on Angela’s face , but the camera person is zoomed in too close!! One of the sexiest things about women is their feet! What a missed opportunity. I can’t stay mad because then they both turn over to show us their derrieres! This is when I almost lost it for the umpteenth time. Madison’s underwear seemed sexier for some reason, even though they were fuller panties. Then as she put her feet over the tub!! (But sadly once again the camera person was zoomed in too much. Not trying to bash, but constructive criticism. Stop with the jerky, fast camera movements back and forth. Make sure you get the entirety of the women in the shot and be slow and methodical about it. This isn’t a shaky handcam horror movie.) I’m saying this from a perspective of how great this vid was, how hard it was to get through it, it was almost perfect!

Made it 6 min in, but when the bottoms came off, it was a wrap. Will try to get through it fully tomorrow.

❤️ Madison and Angela. More bath time with these two!! This is a must get!! A hidden gem!